T-Series vs PewDiePie subscriber fight is getting out of hand

Some of you may have noticed, there is a fight for fame in the most used on-demand video streaming website - YouTube. The currently most subscribed celebrity - Felix Arvid Ulf Kjellberg (PewDiePie), may soon be surpassed by the Indian music record label T-Series. Pew’s fans called everyone for action, to subscribe and keep him at the top place. That’s all fine, but when do you know it has gone overboard? Three days ago, I’ve received the following spam email from one of my hosting providers… 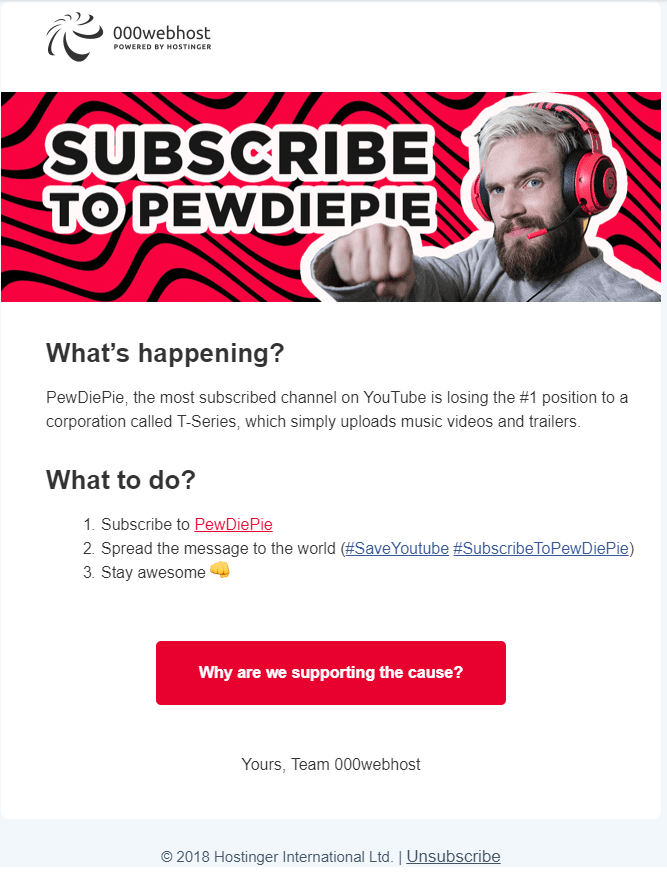 Felix is famous enough not to need this kind of crappy advertisement - whoever cares is already subscribing to him, after all that posting, everywhere. And noticing the clever crafted “#SaveYoutube” hash tag… this has nothing to do with saving YouTube. Actually they are doing better than ever, with so  much traffic coming from India, due to T-Series being so popular.
Just to show you how big of a deal this whole fight is, let me show you another screenshot of a YouTube stream, that accumulated more than 100 million views, for the last week.

Obviously, someone smart, caught up with the whole farce and made a stream, showing both Pew’s and T-Series’ subscriber count side to side. For less than a week, this stream accumulated more than 116 million views and more than 300 thousand subscribers, for that channel. Now that is what you can call success, knowing this channel is relatively new - started in the beginning of 2018 and only having around 200 thousand subscribers until recently.

In fact, the impact of this stream to the growth of the channel was so big, that it can be accounted for ~89% to 92% of the channel views. The following image shows the channel stats as of today.

According to SocialBlade.com, this brought around $300 000, in advertisement revenue, to the channel owners - not even counting the donations and stream tips they collected from the millions of viewers.

Why this ramble? I’ve seen the same repeating question all over - can I make a career/money/living off YouTube. This gives us the answer - yes you can. The only thing you need is a hunch, an idea and to follow the trends. This situation is nothing new - the fight is going on for months now, but the stream was something original, no one else thought of. Even though, this one was the biggest and still on-going success, these guys have had other streams on popular topics, which brought them the other 13 million views over the last year.

The other thing is the extent to which this subscriber fight grew. India has more than 1 billion population and most of them like their pop music, PewDiePie will eventually lose - let it rest already. Why do we need companies we trust, to bombard us with this spam?